Center for the Arts and JH Public Art are pleased to announce the launch of Jackson Hole’s inaugural public piano, which is adorned with a design by local artist, Haley Badenhop. A ribbon-cutting ceremony will be held this Friday, July 19 at 12PM outside the entrance to The Center Theater located at 265 South Cache Street in Jackson.

The idea began with an old piano that was gathering dust in a hallway of The Center and was not getting much use. Oona Doherty, The Center’s Creative Initiatives Director, walked by the neglected piano often until last spring, she decided it was time to reclaim the piano, bring it back to life, and make it accessible to the public. JH Public Art agreed to co-sponsor the project, and a collaboration was born.

“JH Public Art is so happy to partner with The Center on Jackson Hole's first public piano. People have been asking for a public piano, and, now, through this collaboration, they have one,” said Carrie Geraci, Director of JH Public Art.

Street pianos are huge in Europe, and the concept is gaining popularity stateside with pianos popping up in major cities including Portland, Boston, Atlanta, New York City, and Boulder.

In May, The Center teamed up with Jackson Hole Public Art to facilitate a call for proposals that was sent to several hundred local artists. Jackson-based artist, Haley Badenhop, was selected based on her proposal to create a place-based, inspirational design. Haley is known for her colorful, large-scale murals and was intrigued by the opportunity to paint a piano having learned to play the piano herself at a young age.

“The inspiration for the piano was to incorporate playfulness with images from our natural surroundings,” remarked Ms. Badenhop. “As you circle the piano you see a fish leading towards a river, flowers below the mountains, continuing towards trees, and a bear climbing onto the other side. Many of the public pianos say “Play Me,” but I decided to simply go with “Play” as a push to PLAY the piano & PLAY outside.”

Following Friday’s ribbon-cutting ceremony, the public piano will continue to live on The Center campus for all to enjoy and use.

“The public piano creates a neighborhood vibe on The Center campus. It is a welcoming presence, inviting participation in the arts. I look forward to seeing who sits down to play,” stated Ms. Doherty.

The Center and JH Public Art are seeking Piano Stewards, volunteers that can check-in on the piano and help us ensure it continues to be well-cared-for. If you are interested in volunteering, send an email to Oona Doherty - oona@jhcenterforthearts.org.

On a roadtrip from her farm town in Ohio to California about 10 years ago, Haley drove through the mountains in Colorado and realized cute little mountain towns existed. Six months later, she was living in Vail and now she’s been in Jackson six years; first doing Fashion Design, and now focusing on illustration and painting murals. If she isn’t painting, you can find her skiing those pretty mountains, chilling in a cafe, or flying to different country on a whim. Follow her online at HaleyBadenhop.com or Instagram @haleybhop. 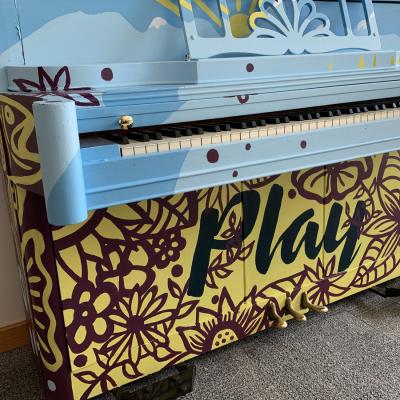 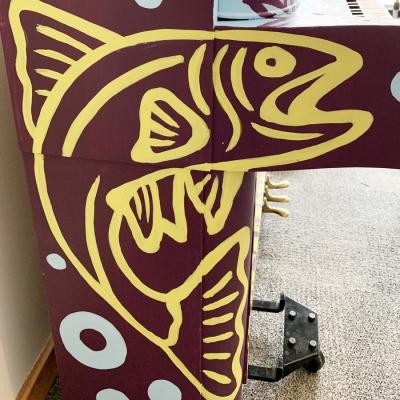 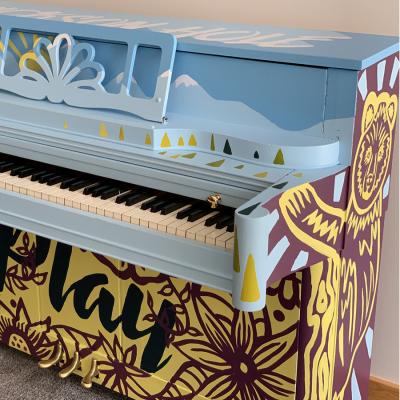